Okay, since making bodies for my bag tag rattles, squeaks and tingaling sounders, they are getting adopted!! Thank you so much guys!! I will try my best to make more soon. Sorry, but the fur I get takes time to come in from my supplier. Well at least the kind I like. My supplier has health concerns, when it comes to mailing and takes time for her to get to her PO. Still in the end it is so worth it. Haha!

The last post you saw I updated the cat bag tag. This time I updated the pink and purple Happy Bear face!! And later that night, I updated her listing, she sold in just a few minutes!! I basically, added a squeak sounder to her left paw, and she has the adorable bird sounder or tingaling sound inside her already. I trimmed her fur and she is in a lovely bubble gum pink and purple color combination. She is a smaller Happy Face bear. I hope she makes her new owner just as happy?! 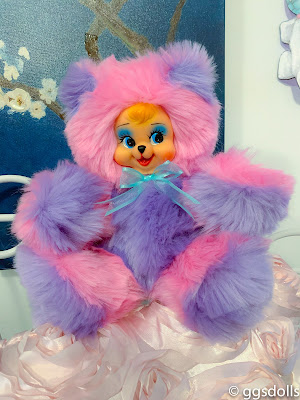 Then, I received these lovely ceramic figurines of sexy girl angels on pillows. I've seen them once before and they are just adorable. In orange and blue, I acquired them via an Etsy shop called, "LemonChiffonVintage" owned by Stevie-Lynn. She was so easy to work with and ship these cuties super fast too!! They are made in Canada, as shown in the sticker of the orange gal. They will live with me for a bit... Thank you again Stevie-Lynn!! 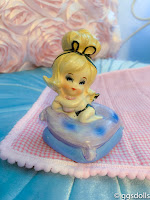 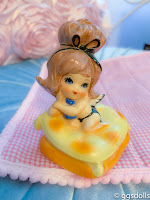 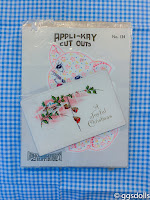 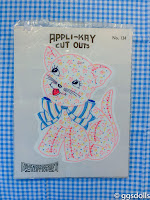 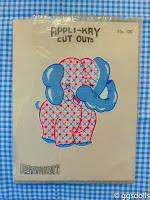 Next, these vintage 1950s iron-on animal patches!! So cute! I got this lot of three, a cat, elephant, and bunny. Titled, "Appli-Kay" cut outs. They are just the bees knees in kitschy cute too! I was also able to snatch this two bear iron-ons as well. Same maker too! I fell in love with the bears first, then bought the Lot. So funny though, cuz the Lot came in faster then the one. LOL 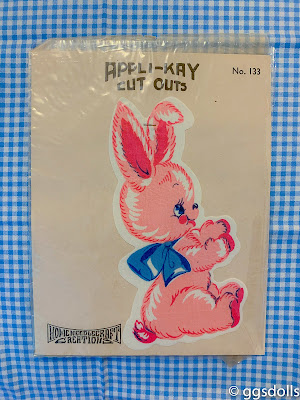 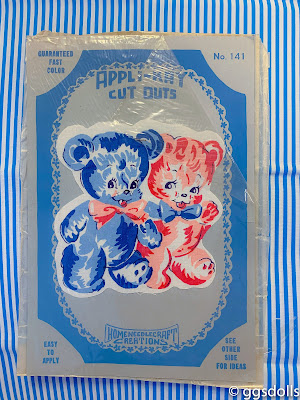 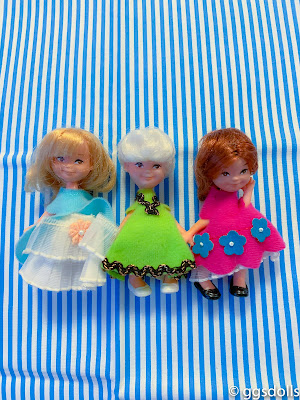 Last for today, I used 'Buy it Now' via Ebay and got these cute little dolls by Perfekta. They look a lot like a miniature version of Uneeda's, 'Little Sophisticates'. Just look at their bodies!! Their bodies are like tear drops, with a wider torso with small necks, and a bulb the end. Their hands, legs and feet are just like Little Sophisticates, in their stance and pose. The other difference besides their size is their face paint, with eyes opened and no lashes. They have a simple look to them, with things like their hat or panties glued to them. Made in Hong Kong. Even their little shoes are slip ons and they are so tiny! I don't recall seeing these cuties before? Wild!! Because, I generally see most dolls at least once during my usual searches... Haha! I cleaned them up since the first pic I took above. The Blonde girl just needed her dress resewn, the middle gal, a bubble cut, needed a good washing, and the red head, sadly, still has glue residue on her head. Perhaps to hold a hat in place, but is now missing. One is missing shoes, but lucky I was able to find a replacement. She could fit Barbie's sister Kelly's shoes. 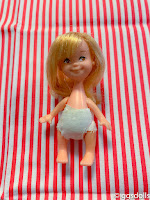 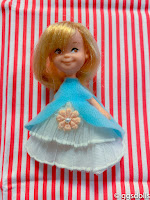 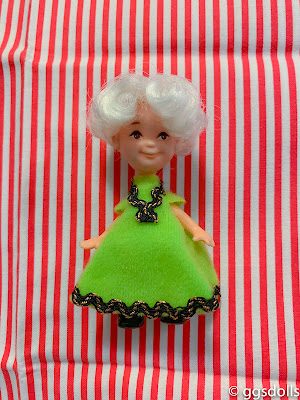 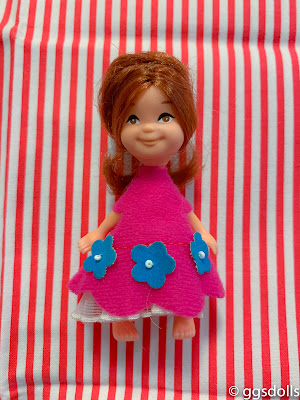 Their fashions seem generic, and all three are in felt, with some applique flowers, rik rak, and frills. Definitely keepers. They will stay with me for a time... They are also very hard to find clothes for. Because of their tear shaped bodies. Ugh! Oh well...

We are out of the full lock down, but not out of the woods... ugh. Stay safe you all and many virtual hugs from Guam!!

Thank you for stopping by! ~ ggsdolls 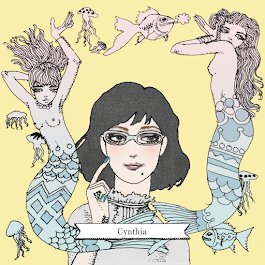 Gigi
Pacific, Guam
A doll/toy collector since 1992, a blogger, and one who loves to do research, to find and collect vintage to modern dolls, toys and ceramics. Mostly those made in Japan! Nursery Kitsch, figurines, decor, Shoujo mangas, Anime or galaxy eyed girls, and all things cute!! Macoto Takahashi, Rune Naito, Rushton stuffed animals, Big eyed waifs, fawns, puppies, bunnies, the list goes on... 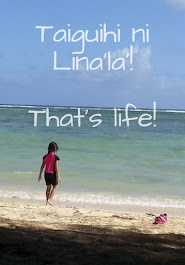